It is August 17, 2019. It is the start of the 8th Berlin Wall Race: 454 individual runners gather at 6am in the Friedrich-Ludwig-Jahn Stadium in Prenzlauer Berg to embark on the 100Meilen Berlin adventure. 100Meilen, which send the participants on a journey full of physical and mental challenges. 100Meilen, which the participants will also repeatedly confront with the recent German history of the Berlin Wall. 100 miles that encourage them not to forget what walls can do to people. 100Miles full of running and emotions. This is exactly how it should be. 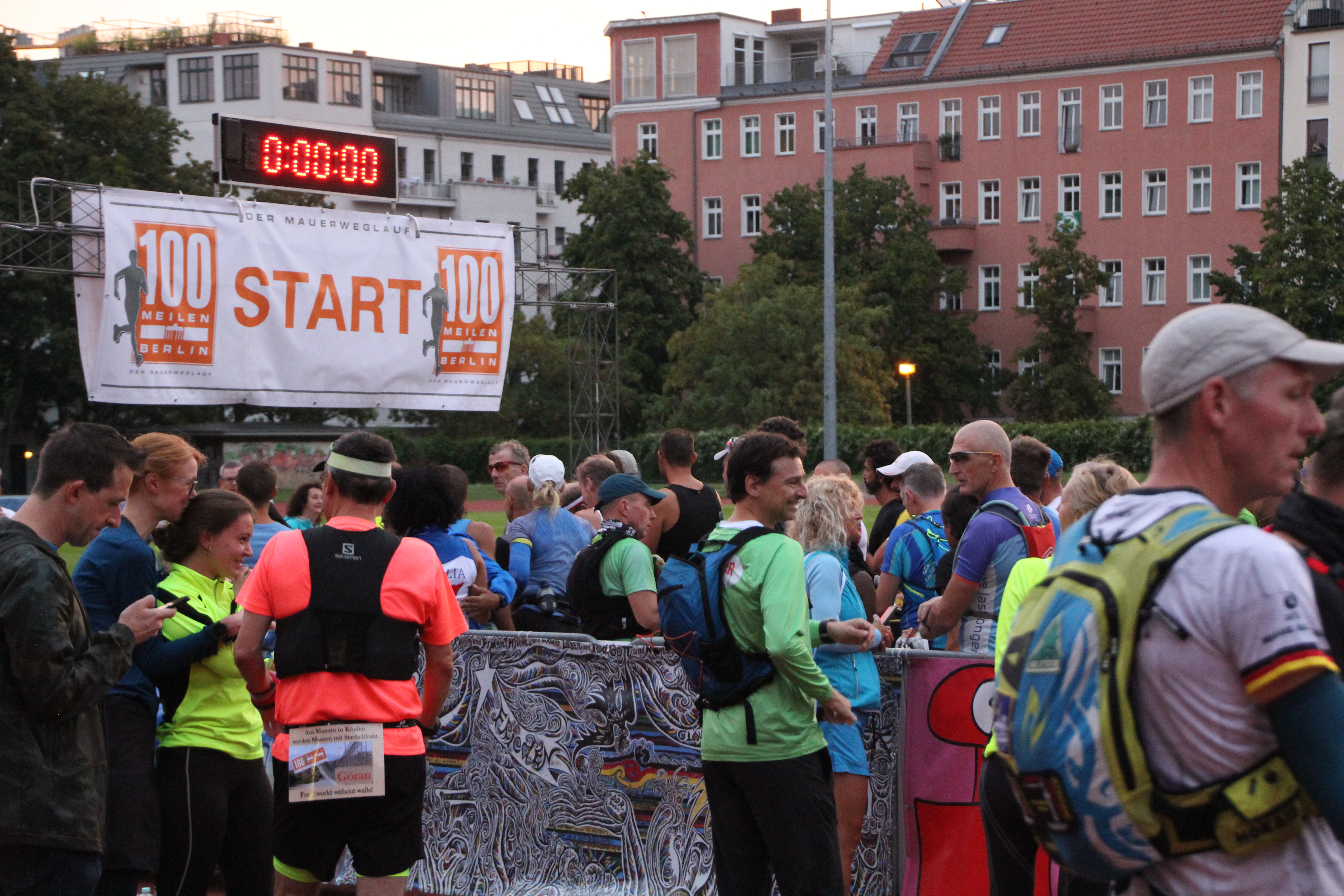 One hour after the individual runners set course, the relays also start their race. This year there is a record high total of 123 relays participating.

In the beginning, the weather plays along wonderfully. Not too hot, not too cold – and a gently breeze makes for a superb running atmosphere. But 100 miles don’t go without surprises. At some point the sun comes out. It gets hot and humid. Everybody is struggling. Only the night brings some cooler and clearer air. Sunday morning the rain comes. Those who needed more than 24 hours will remember. Between 7am and 12noon, the rain didn’t really want to stop. Runners and volunteers get equally soaked. Well, that’s also part of it and makes the 100Meilen Berlin what it is – a very special race that never lacks excitement: 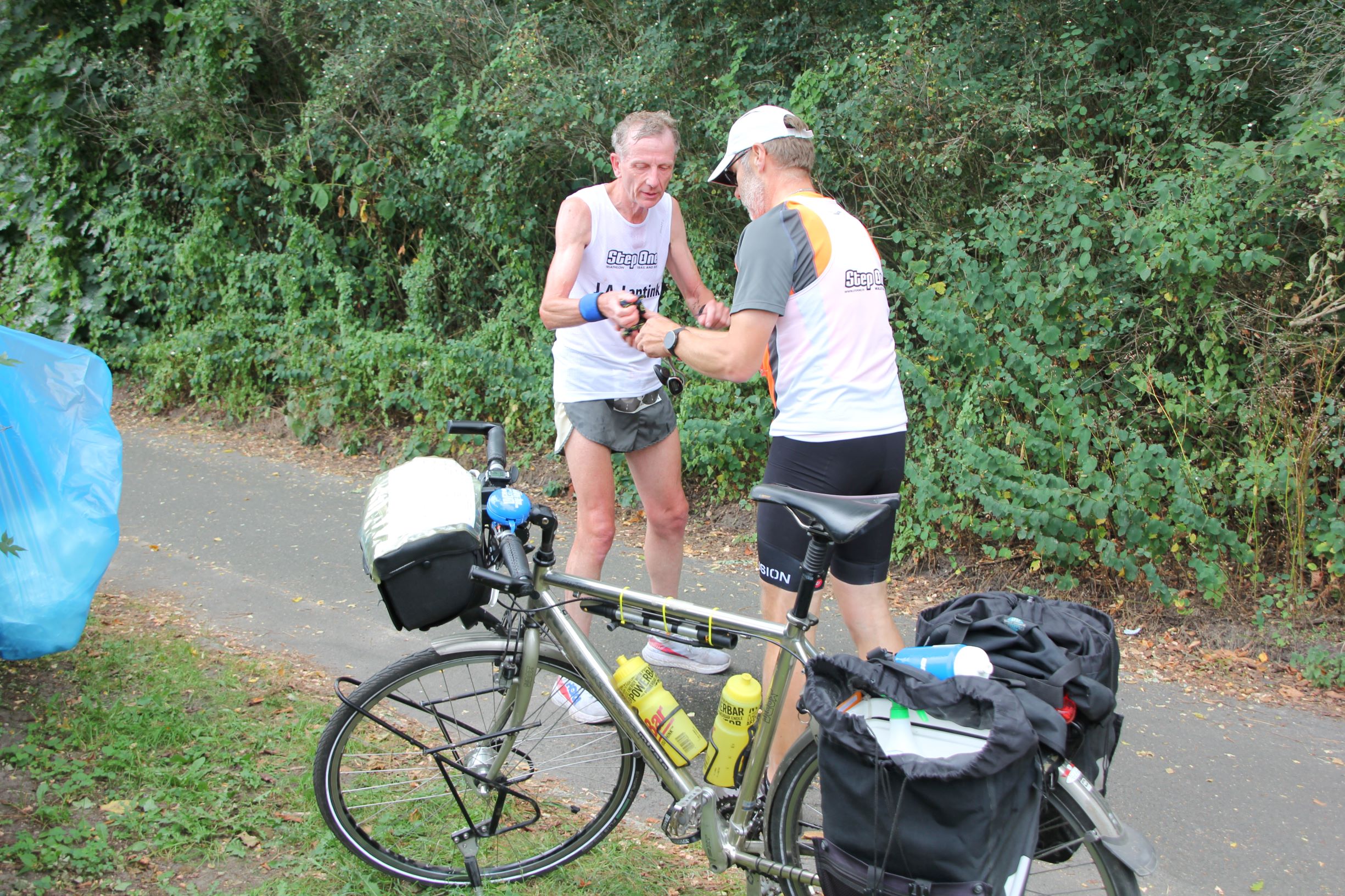 Right from the start, 61-year-old Dutchman Jan-Albert Lantink leads the runners’ pack. The winner of the 2017 Berlin Wall Run almost flies over the course at a speed of well under 5:00min/km.  Behind him follows Sascha Dehling, ‘local hero’ of the LG Mauerweg – but he can’t catch up. For a long time everything looked like a clear victory for the Netherlands. But at KM108 on VP this time Lantink is done. He drops out. Dehling’s chance has come– although he certainly was not planning on getting it this way. After all, he only wanted to do a long training run for the upcoming Spartathlon (246KM) in Greece. Now the unexpected chance to win. And he grabs it: After a fantastic 14:37:44 hrs Sascha Dehling crosses the finish line and wins the 100 miles Berlin 2019. Frank Ewen from Delbrück comes in as second single runner with just 45 minutes behind in 15:20hrs, third man is Sven Herder from Dresden in 15:45hrs. 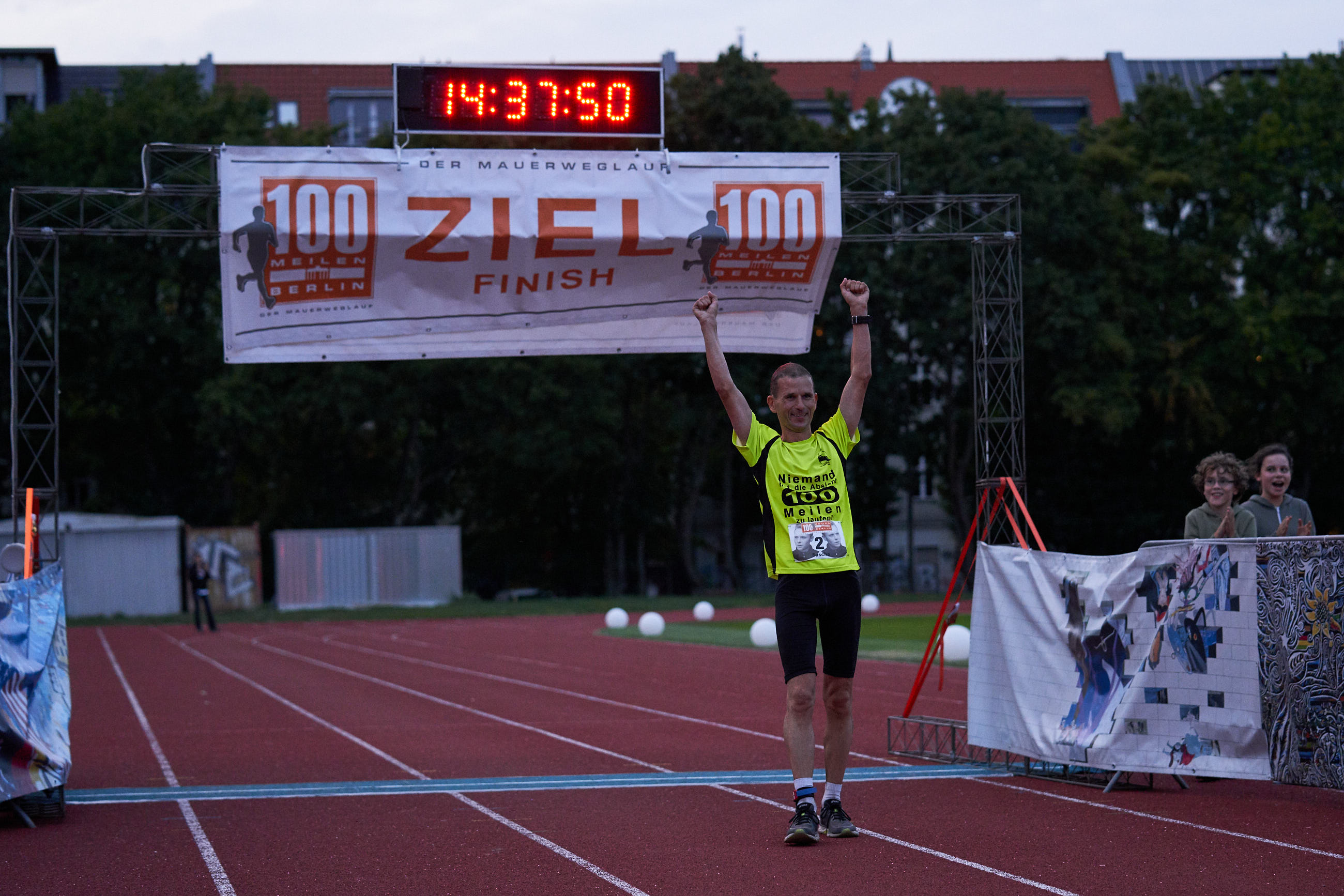 The female race bears a great surprise: The 27-year-old Eleonora Rachele Corradini from Italy finishes third overall (even before the third man!) in the 100 miles of Berlin and wins the women’s context with more than 3 hours ahead of the next one. With a time of 15:22:49 hrs she also improves the course record for the women by more than 6 minutes! Corradini dominates the race from the beginning. Starting together in a group with her Italian teammates, she leaves them behind eventually and runs her race. Dany Möhle from Austria finished second in 18:27 hours, followed 30 minutes later by Nadia Comiotto, another Italian in the top three. 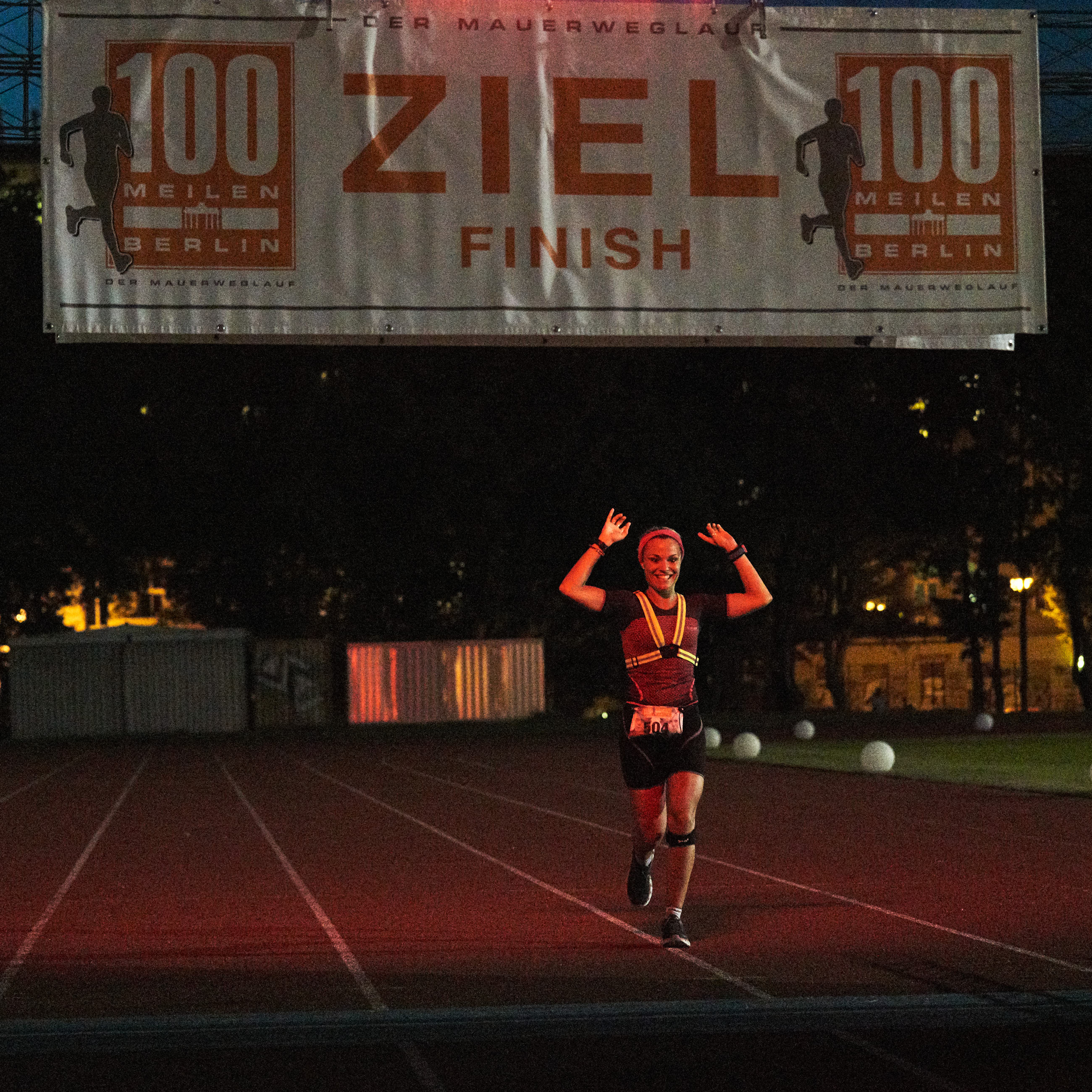 The relay competitions were equally exciting. Several strong teams entered into direct competition from the beginning and went literally the extra mile to steal a minute from the other team. In the end the LG Mauerweg use their home field advantage: Their 10+ relay Fast Forward races over the finish line in 11:03:08 hours – that’s a new track record! What a team effort! With some distance, the Axel team of the Axel Springer publishing house follows. Just under 13 hours, the Berlin Social Runners‘ relay team manages a brilliant final sprint.

The first single runners have already crossed the finish line when the first 2peron relay approaches the finish in giant steps. The Team from Berlin needs 15:33:28 hours to reach the Friedrich-Ludwig-Jahn-Stadion and can hardly believe their victory. A good 1.5 hours behind, the Marzahner Atzen follow in 17:09 hours, closely followed by the Hänschs from Bavaria in 17:13 hours.

It is always a special pleasure to watch the relay teams perform – especially when the teams wait for their final runners at the stadium and join them for the final lap. This is also the Wall Race: Together to the finish!

An important and emotional moment at every Wall Race is the commemoration of the victims to the wall. This time Dieter Wohlfahrt was remembered, who as a student in West Berlin helped other people with they tried to escape. In 1961 he was shot dead by East German border guards. The participants in the Wall Race were encouraged to pause at the memorial plaque of Dieter Wohlfahrt at KM55 and leave small cards with their thoughts. It is always touching to see how many of the runners take the time to stop and reflect for a moment – and thus keep the spirit of the Berlin Wall Race alive. 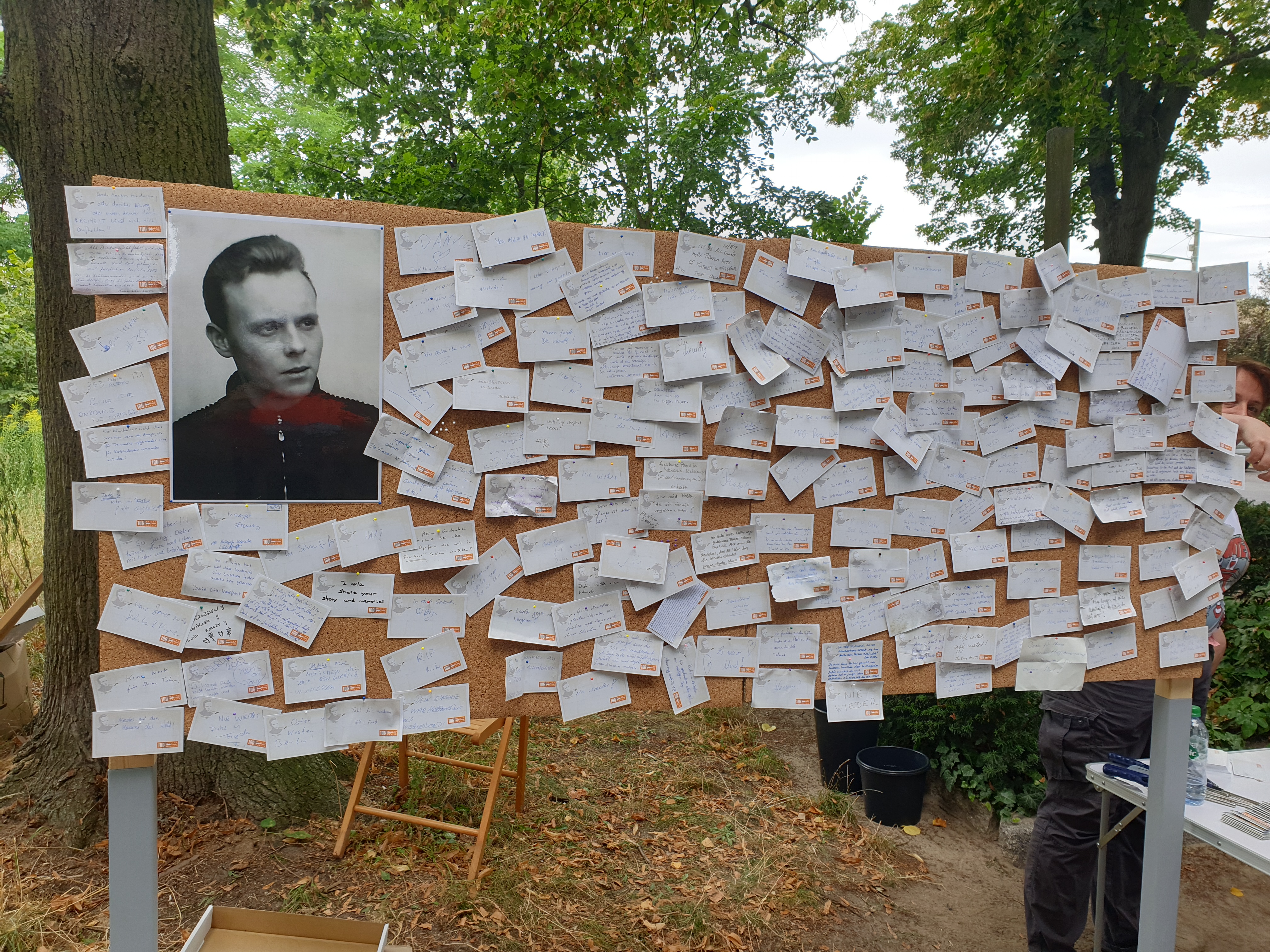 Incredibly positive is the motivation, enthusiasm and performance of the volunteers. Over the whole weekend, more than 400 volunteers made sure that the 8th Berlin Wall Race became such a success and that the runners could focus on running. The teams of the 26 refreshment points surpassed themselves in the variety and quality of food and drinks and in their friendliness. There were encouraging and motivating words, lots of smiles, cheering and many good wishes. This very special, almost communal character of the 100Meilen Berlin became also evident at the final award ceremony. As every year, every single finisher was called on stage to receive their medals and to conclude a very special weekend.